In a pizza joint, next to a bagel place, somewhere on Long Island, one August day in 1975, Marian Wohlafka, sat complaining to her husband, Warren about how little money she had in her school Home Economics budget. Marian was a Home Economics Teacher at Connetquot High School for 5 years, and was constantly coming up against this same issue, high supply costs. Warren, who was a notions/fabric buyer, offered the idea of putting together a catalog for the sewing departments of local school districts. Hence “Sewing Aids and Notions for Everyone” (SANE) began. 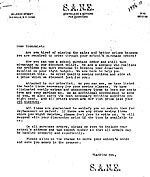 The business was small at first; the catalog was two pages and a cover letter (see original [pdf]), offering 60 items, all notions. The pink mimeographed pages were given to Marian’s friends and fellow Home Economics teachers in the Fall of 1975. The “stockroom” for the business was a section of Marian & Warren’s basement taking up all of 100 square feet.

Marian took a two year maternity leave from teaching while Karen entered the world, returning to teaching in the fall of 1978. That same year, Housewares was added to SANE’s offerings. Consulting with fellow New York and New Jersey teachers while attending local conventions Marian determined what new items should be added to the catalog each year, as well as making new contacts.

By 1984, SANE completely outgrew the basement of their home, and Marian & Warren went off to look for space. Over the next 12 years, SANE moved into 4 different size warehouses, each larger than the one before. The product lines grew exponentially, as did the number of pages in the catalog. Over time, orders began coming in from many eastern states.

In 1999, Marian and Warren decided that they’d had enough of New York, and picked up their home and business and moved to Hamilton, Ohio. They moved SANE into yet another larger warehouse, growing their business to approximately 7,000 square feet. They built up a nice rapport with the community over the next several years, opening up for well attended “Retail Days” several times a year. In 2007, their daughter, Karen, escaped her taxing engineering job, and joined the company. SANE continues to grow and supply more and more schools across the country with well priced, high quality supplies.

COVID-19 Notice: We will be closed beginning Tuesday, 3/24 until Friday, 5/1. Any order placed during this time will be fulfilled when we re-open. Dismiss